Today I observed a red, octagon (eight sided), water knob, a hand wheel that’s in use as an isolation valve (shut off in the case of emergency) for the water supply going into the room I was standing in.

The Holy Spirit prompted my heart to note the knob’s shape, color and then the direction this knob was pointing, as looking toward it on an extended imaginary line out into space. This being the compass bearing, which happened to be due west.
I dutifully noted all three and then The Holy Spirit prompted my heart in an unction to look at the significant sign in the heavens that would found exactly on this line at the precise time of the day in my geographic location.
I did so and went to Stellarium noting the time and direction.
Located “exactly” on the point of the RED OCTAGON at this exact time was
COMET ISON 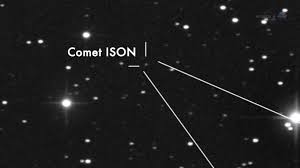 AS AN UNCTION FROM THE HOLY SPIRIT AND AS A WATCHMAN RE: EZEKIEL 33: Comet Ison is a warning in the heavens to repent now, come to Jesus, Jesus is coming for his people, Time has run out.

NOTES ON THE OCTAGON AND WHY THE RED OCTAGON IS USED AS AN INTERNATIONAL SYMBOL TO WARN PEOPLE TO STOP:

RED. Physical
Positive: Physical courage, strength, warmth, energy, basic survival, ‘fight or flight’, stimulation, masculinity, excitement.
Negative: Defiance, aggression, visual impact, strain.
Being the longest wavelength, red is a powerful colour. Although not technically the most visible, it has the property of appearing to be nearer than it is and therefore it grabs our attention first. Hence its effectiveness in traffic lights the world over. Its effect is physical; it stimulates us and raises the pulse rate, giving the impression that time is passing faster than it is. It relates to the masculine principle and can activate the “fight or flight” instinct. Red is strong, and very basic. Pure red is the simplest colour, with no subtlety. It is stimulating and lively, very friendly. At the same time, it can be perceived as demanding and aggressive.

For Jews 8 was the number which symbolized salvation, rebirth and regeneration: 8 members of Noah’s family were saved in the time of the Great Flood and it was on the 8th day of his life that a boy child was circumcised, signifying his entrance into the covenant family of Israel, the chosen people of God.  But for early Christians 8 was the number which symbolized the resurrection of Jesus Christ and the formation of the New Covenant.  Jesus was raised on the day after the 7th day, which was the Sabbath, making Jesus Resurrection on the 8th day, Sunday, which was the first day of the week and the day of the New Creation just as the old Creation also began on what is the first day of the week.  It is for this reason that Christian churches built during the Byzantine period were 8-sided structures.  The rediscovery of the ruins of St. Peter’s house in Capernaum was verified by the identification of a central room used for  The seventh day completes the first creation.  The eight day begins the new creation.  Thus, the work of creation culminates in the greater work of redemption.  The first creation finds its meaning and its summit in the new creation in Christ, the splendor of which surpasses that of the first creation.

In the U.S., all stop signs are bright red octagons – and for some good reasons! The only street sign that uses an 8-sided shape is the stop sign, which helps drivers from far away to quickly recognize this important sign. It also lets a driver in the other direction know which sign is facing you without being able to read the front of the sign… when someone sees an octagonal street sign, they know right away what it means!
Another reason why stop signs have eight sides is that in general, the more sides a street sign has, the more important its message is! Eight is about as many sides as you can squeeze onto one street sign, so it’s the designated shape of one of the most important signs: STOP!