Check yourself Christian does this new “Jesus Fad” set well with you? 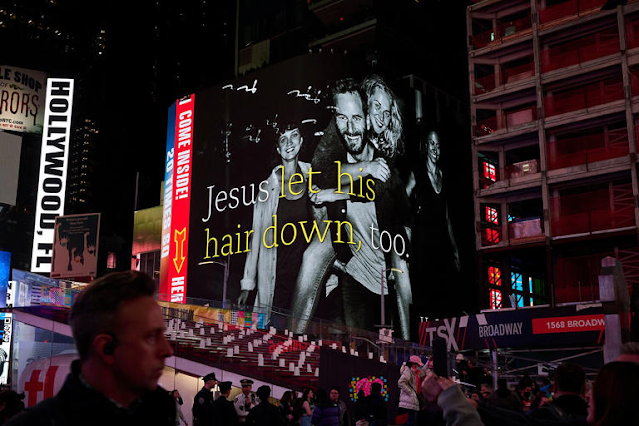 Christian Group Seeks to Promote Jesus Christ in a New Light with $100 Million Ad Campaign: ‘He Gets Us’

A Christian group is spending $100 million on a new campaign to promote Jesus Christ and the values they believe he held.

The “He Gets Us” campaign has already started appearing online and will take over billboards and airwaves across the nation with the goal of presenting Jesus in a new light to Millennials and Gen Z, according to Christianity Today.

— including a Super Bowl ad, per The Washington Post — and content optimized for other high-profile platforms were created with assistance from Michigan-based marketing agency Haven.

“A lot of times, the perception is that Christianity is kind of working against people,” campaign spokesperson and Haven president Jason Vanderground told NBC News. “We wanted to help them see that in Jesus, there was someone who had a lot of common experience just like they did.

The campaign is funded by The Servant Christian Foundation, a nonprofit backed by a Kansas-based, Christian donor-advised fund called The Signatry.

According to Vanderground, the “He Gets Us” campaign has two main goals: “increase the respect and personal relevancy of Jesus” and “encourage Christians to follow the example of Jesus in how they treat other people.”

The ads will encourage users to visit HeGetsUs.com and connect using features such as a live chat function, a text line for “prayer and positive vibes” and more, Christianity Today reports.

“The price you’ll find on each item is not monetary but something you’ll be asked to do: help a neighbor, serve the poor, forgive a family member, etc.,” the site explains.

Who are you Amir Tsarfati? – My Brother in Christ or A Ravenous Wolf in ‘Sheep’s Clothing

Who Are You Amir Tsarfati? Original post 6/4/2018       These things speak,and exhort, and rebuke with all authority.  Let no man despise thee. Titus 2: 15 . KJV This Blog is written in accordance with 2 Timothy 4:2-3 KJV and 1 Corinthians 5:12-13 KJV Note:  I love Israel and the Jews.  I am a born-again Christian who truly believes the Jews are God’s chosen people and abhor replacement theology. For the past year I’ve been closely following Amir TSARFATI on his BEHOLD ISRAEL YouTube channel.  I don’t use Facebook, was basically thrown off about 8 years ago for posting content that spread hate (simply posted photos of Islamic thugs murdering innocent civilians) . I also don’t use Twitter. Left after 10 years, nearly 10,000 followers, when new rules blocked my 1st amendment rights of free speech. I’ve been extremely impressed with Amir TSARFATI. I’ve been thrilled by his ministry. He shares my conservative views, especially achieving peace through stre
READ MORE

September 27, 2018
Dear Dr. Eugene Kim, References: a. Dr. Gene Kim video serving God https://youtu.be/LV6j0rB0yos See his comments to Andrew Sheets b. Dr. Gene Kim Teaching video on Trinity c. Dr. Gene Kim Teaching video on 501c3 conspiracy I earnestly pray you receive this opportunity to correct your errant ways. You are a gifted and brilliant young man. Most of your teaching is rock solid. But these glaring issues addressed below must be addressed. BBC International Dear Dr. Eugene Kim, Thank you Sir for responding to my comment (reference a) It’s obvious by your response you haven’t read the blog I sent you about why Brick and Mortar Buildings called churches are not biblical. Most of what you sent me in your response by way of your video teaching is addressed in the blog. As far as using Romans 13:1-7 to defend 501C3 and your building – I address below. After careful consideration – I have to write this as a testimony as a witness submitted as Ambassador for The
READ MORE

https://www.nowtheendbegins.com/7th-congress-of-leaders-of-world-religions-adopt-human-fraternity-chrislam-document-pope-francis-mohamed-bin-zayed/       Now The End Begins CHRISLAM CHRISLAM CONFIRMED: Led By Pope Francis, Leaders Of The World’s Religions Formally Adopt Human Fraternity Document At 7th Congress Published   44 mins ago   on   September 17, 2022 By   Geoffrey Grider   NOW THE END BEGINS SHARE: With the adoption this week by the 7th World Religions Congress of the Human Fraternity document created by Pope Francis and Mohamed bin Zayed, Chrislam is now the official One World Religion. It’s official, Chrislam has  now been codified and ratified, with the approval at the  7th Congress of Leaders of World and Traditional Religions , of the Human Fraternity document  created by Pope Francis  of the Vatican, and financed and promoted by  Mohamed bin Zayed  of the UAE. Question – Guess who they forgot to invite to the festivities? Answer – Jesus Christ, His Name appears nowhere
READ MORE